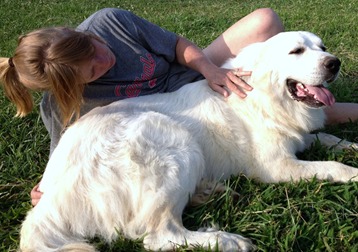 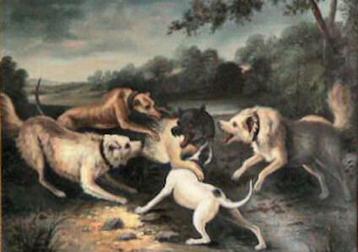 The Great Pyrenees is a very old breed that has been used for hundreds of years by shepherds who inhabited the region in and around the Pyrenees Mountains of southern France.  The Great Pyrenees was well known as protector of the sheep and goat herds in the mountains. Their task was to be the guard dogs of the shepherds of the Pyrenees, but they moved up in French society in the eighteenth century. It was not unusual for wealthy individuals to keep these dogs, and the show dog fancy adopted this breed very early on.

The work of art, "La Chasse au Loup" by Jean-Baptiste Oudry (1746), depicts two Great Pyrenees fending off a large wolf (the title literally translates as "The hunt of the wolf"). The other two dogs in the painting resemble the heavy greyhound types that were used to hunt wolves in Great Britain and Ireland.  The fact that more than two-and-a-half centuries have gone by leaving the Great Pyrenees effectively unchanged is a noteworthy achievement for Great Pyrenees breeders worldwide. Ours is an ancient breed and its breed's type has been set. That is not to say it cannot be changed or altered by the whims and fads of breeders bent on winning dog shows or "improving the breed". The breed could be changed though it should not. It should be the goal and aspiration of all Great Pyrenees breeders to produce dogs that epitomize the breed's Heritage and not just the Kennel Club's idea of the Breed Standard.

Some of us have Great Pyrenees as working dogs. Others have Great Pyrenees as companions and pets. We make a great distinction between the two and we expect different behaviors to develop based on their roles, however, even as a "pet" the Pyr is still working to protect it's flock.  As pets, they may not have sheep or goats to guard so they will imprint on their human family and adopt you as part of their flock.  This bond will not break.  They are very loyal to their "charges" and will protect you, even to their death.

We work hard to socialize the Pyrs that are to become pets but at the heart of all Pyrs lies a true guardian.  By socializing a Great Pyrenees we do not remove the working dog instincts (we simply cannot erase 2000 years of genetics that easily...nor would we want to).  By socializing, we equip a Great Pyrenees with the social skills required to be in our homes, in our neighborhoods and parks, and even in our hospitals and nursing homes to provide comfort to the elderly and sick. Yes, Pyrs make fabulous pets and therapy dogs but, make no mistake, even though they are mild mannered, the most well-behaved, well-socialized Great Pyrenees is still a serious working dog, ready to go into action to defend its "flock" if said flock were to be threatened.